A discussion of The Feeling Sonnets

Every way we’re photographing Black men, and women, and children, whoever, needs to be humanizing. Photography has always dehumanized African and other African-descendent people. Early photographers documented slaves, so if they ran away, you’d have a photograph to know what your slave looked like. That’s the history, and as photographers now we have a duty to show Black life in a positive light. If we take that humanity away, we’re back at the beginning.

An interview with photographer Nicole Buchanan

Over the past few weeks, cities across the United States—and the world—have erupted, suddenly transitioning from isolation and quarantine into a sustained protest movement driven by mourning and anger at the ceaseless murder of Black Americans by police. Nicole Buchanan, a photographer living in Atlanta, took to the streets as an artist, ready to document this moment of historic uprising as she has past waves of protests. Her body of work ranges from magnetic images of protestors in motion to romantic, gauzily lit studio portraits, all of which take as their subject the complexity, nuance, and beauty of Black personhood. We spoke by phone on Monday, June 8.

Rachel Ossip: A lot of your work—like your series The Skin I’m In—is portraiture, and in many ways, the photographs that you’re taking of the protests are also portraits. But you’re in public, and in a crowd, so how does that feel different—in the experience of taking the photos, or in the ways that you’re framing the images?

Nicole Buchanan: Whether it’s at home with my family, at a protest, or in the studio, there’s a thread that weaves through all of my images, talking about Black families, Black neighborhoods, being Black in a white space. I can tie all of those scenarios together, but the experience of taking the photos is very different. And the huge difference is honestly time. Being able to spend time with people, for a planned shoot, feels tremendously different.

When I take portraits in a studio, or am in subjects’ bedrooms or studio spaces, I have time to really make sure it’s what I want it to be. But photographing in the streets, you have to think very quickly. You’re walking really fast, people are chanting, you’re constantly on watch. You have your head on swivel looking for moments, but also making sure that you’re safe. The police and the National Guard are out there. We’re just out here talking about what’s going on, and you feel threatened to the point that you need to bring out the National Guard? That presence—super heavy and super saturated—makes people even more angry, and even more frustrated. People are getting in their faces, and that’s stressful. You have no clue what’s going to happen from one second to the next. 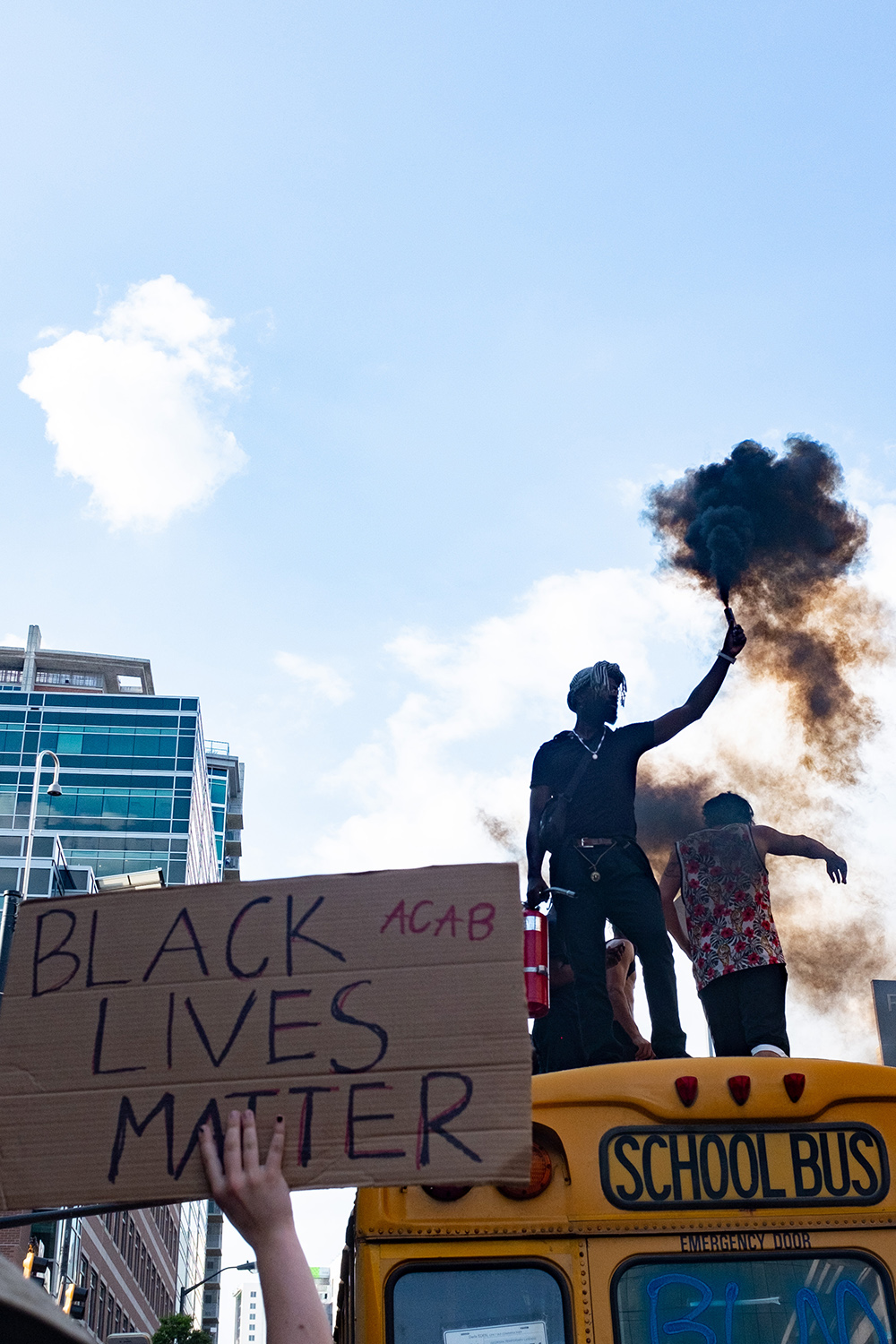 I prefer to have time to really think about what I’m doing, but I also enjoy the exhilaration of being in the crowd and shooting on the fly. It gives me motivation to keep shooting. I work full-time in digital marketing, and I don’t pick up my camera for days at a time, sometimes weeks. Especially during Covid, there’s only so many things in my house that I can photograph. I started taking self-portraits, but I got tired of it. So when the protests started, I turned off my computer, walked out the door, and went out there.

It’s a sacrifice. Any protest takes a lot out of you. It’s really tiring, especially in summertime. And then we’re in a pandemic, so you have to make sure you’re protecting yourself—there’s no way you can socially distance at a protest. A lot of people say that they’re working, but most of us are working from home. Get your work done and get out there. 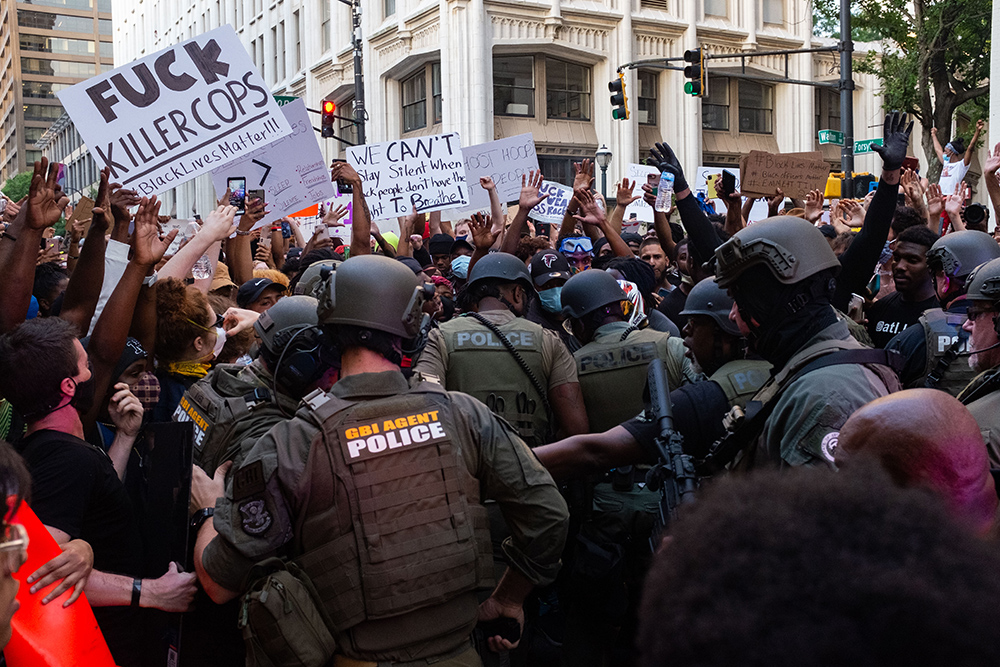 And I don’t see the protests ending any time soon. That collective voice, so many people coming together, is incredible and it’s beautiful to be a part of. You feel the energy, you feel the anger, you feel the pain, you feel the frustration. We need to feel that, people need to experience it together. Hearing the cries of the people opens your eyes to so much more than just reading something online.

As a photographer, it’s also a challenge—there are only so many photos you can take of people holding up signs. I’m looking for those moments of expression, of anger or pain, because that’s really going to show what this movement is all about. 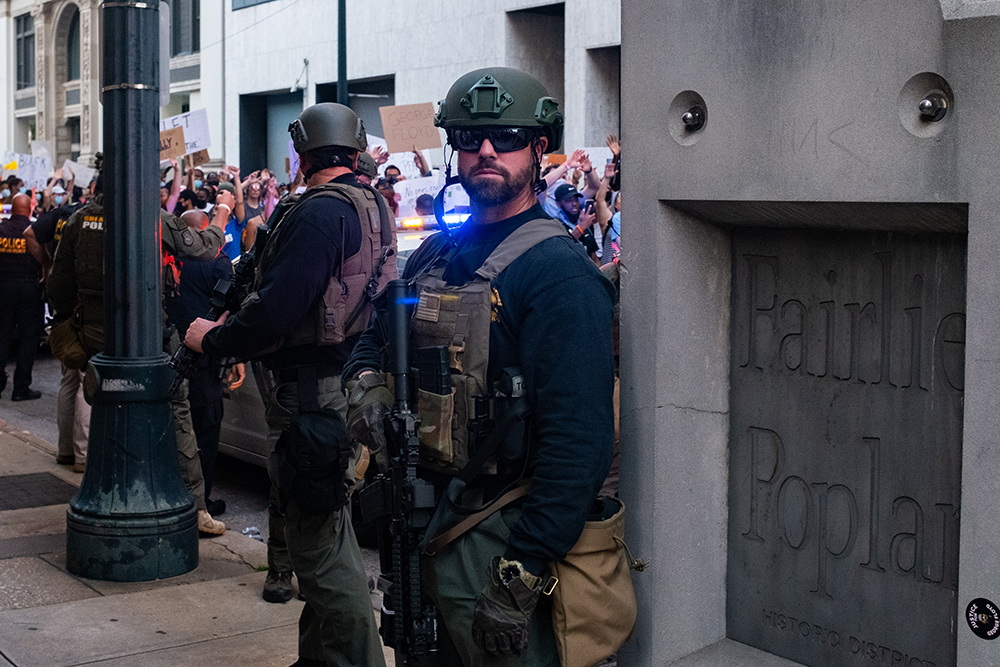 RO: In terms of the health risks, some of your photographs shows cops and guardsmen, and they’re not wearing masks. I don’t know how it is Atlanta, but in New York none of the cops are wearing masks, even though it’s policy.

NB: Yeah, you didn’t see them wearing masks at all. The only thing that would conceal them is the riot gear, and some had helmets, the military gear, and some had hats. They don’t want to cover their mouths, but I’ve seen some covering their badge numbers. 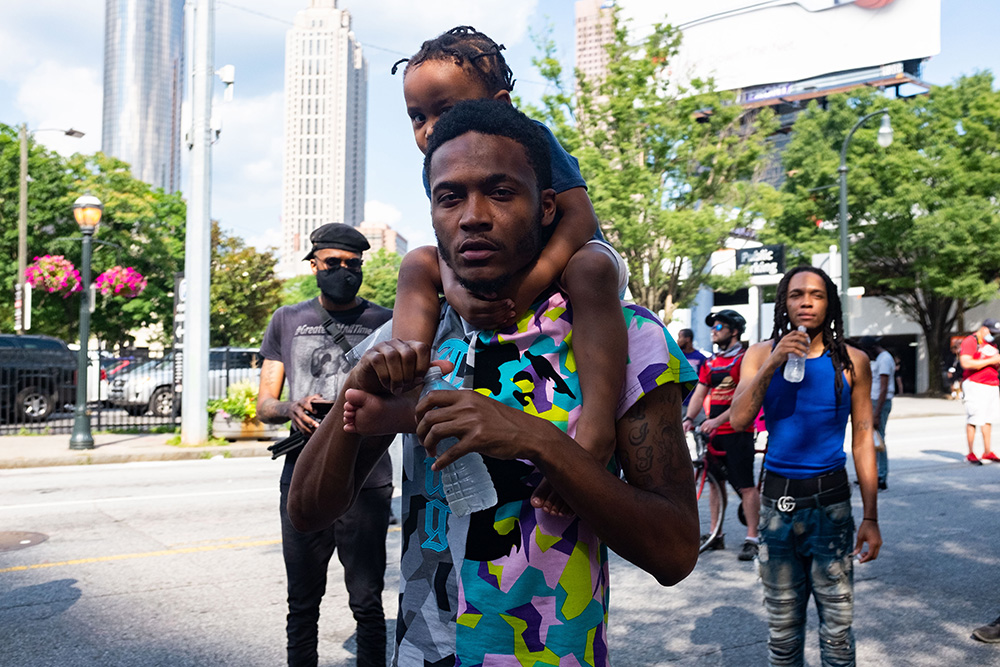 RO: I know people are talking about being careful about circulating images that show protestor’s faces, trying not put anyone who’s protesting at risk. Do you always bring your camera to the protests? Do you always have it out?

NB: It’s difficult, but I honestly don’t agree with the censoring. People made a decision to go out, there are so many photographers at the protests, and the news is out there. You’re going to get shown in some capacity. Of course, I don’t think it’s right for people to be targeted later on, and I wouldn’t photograph someone breaking a window, or looting a store—that I wouldn’t go toward. But it doesn’t make sense to black-out protestor’s faces, strip away their identity, their humanity. Then they go back to being what white society wants them to be: just bodies. Obscuring their faces takes away the whole meaning of the image, their expression, the way that you can connect to the image.

Every way we’re photographing Black men, and women, and children, whoever, needs to be humanizing. Photography has always dehumanized African and other African-descendent people. Early photographers documented slaves, so if they ran away, you’d have a photograph to know what your slave looked like. That’s the history, and as photographers now we have a duty to show Black life in a positive light. If we take that humanity away, we’re back at the beginning. 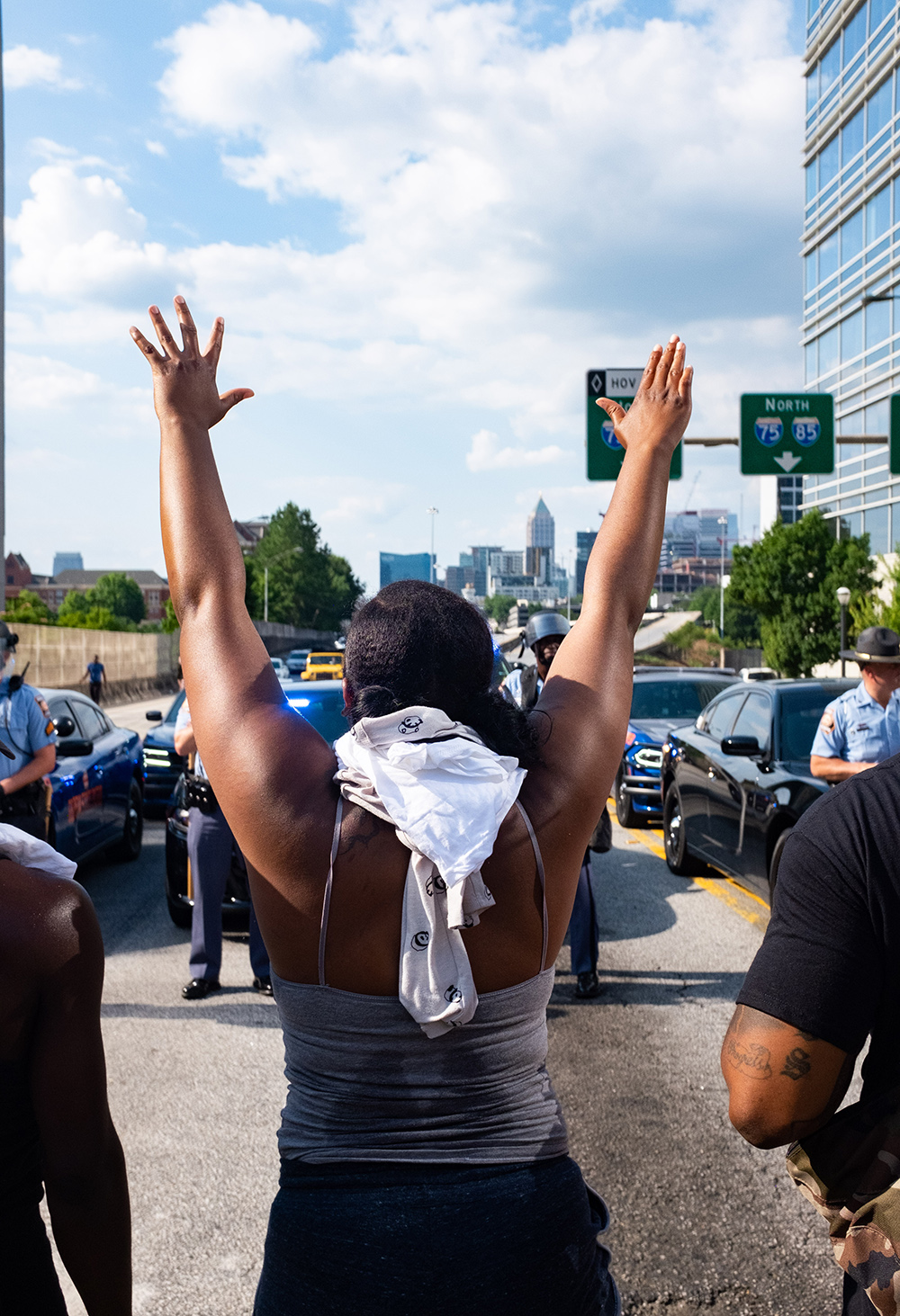 RO: What do you hope the protests accomplish?

NB: A few years ago, I was driving with my sister—we had just left dinner—and I got pulled over. I hadn’t been drinking at all, but the cop asked me if I was, because I was so afraid that something would go wrong that I was stumbling over my words and had no clue what restaurant we’d just left five minutes ago. I want to live in a world where I don’t tremble in fear when I get pulled over for a traffic violation. People die over that now. I don’t want to live in a world where that happens. I don’t want to fear that, and I don’t want to fear that for my family members, or my children. I just don’t. 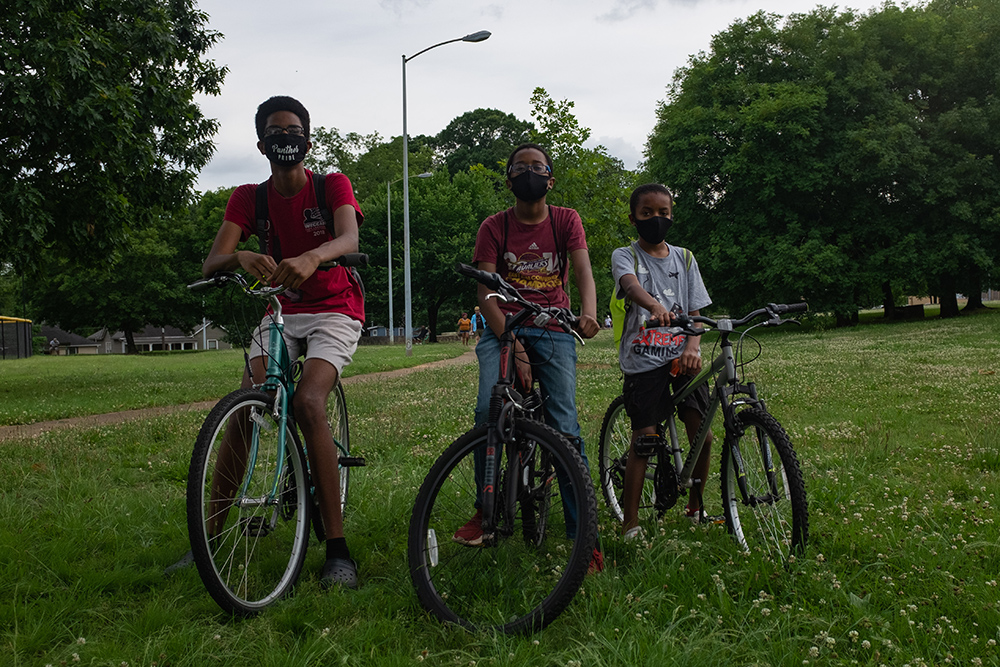 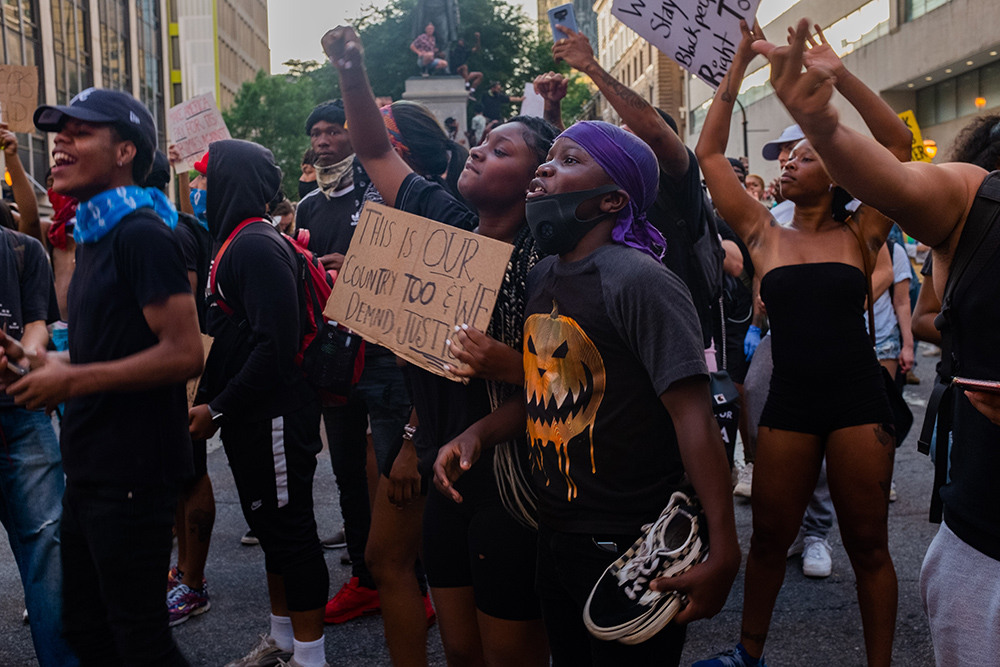 We’re fighting for this younger generation. We want to make sure they don’t have to deal with this. I don’t want to have a kid in the future, a young Black kid, and worry that he’s going to get hurt, or end up in the system and never get out. I worry about the psychological effects of that. I’m sure our parents, our grandparents, everyone before has said that, but until things change, we’re going to keep being out here. Until they change, we have to keep talking about the same things.

I don’t lose hope about things changing in the world. There’s so much regarding race relations that hasn’t been talked about amongst families, or colleagues—or politicians, who are the people who can begin to make some of these systematic changes. This year has been crazy enough that I believe we can truly make the changes we deserve if we get together and demand the same things collectively. That is the only way we can shift the course of history.

After an explanation of the assembly process for the sake of any newcomers came reports from working groups.

People are always accusing me of living in the n+1 office. Did I live there?