It’s German for “The Trump, The”

FLOTUS
Fucking 2020. Haven’t we teached them? They are all so crazy. And I know them, how everyone is just like jumping for joy.  This, I just fucking spit on it, on all of them. For years everybody’s like, “Oh, my God. this is the worst. This is the worst.” I mean, come on. What are they even talking about? They are crazy, OK? We’ll stay right here. We’re not going. We are about to win this, and they will have to cry. You want the worst? It’s my life that sucks. Fucking China. Fucking Democrat people. Fucking babies. Cough. Cough. Fucking—cough. Fucking dumpster fire year.

LAURA LOOMER: PARLER
We are not the same when one segment of the population wishes death on the President of the United States.

OSTEOPATH
President Trump continues to do well, having made substantial progress since diagnosis. He remains fever-free and off supplemental oxygen with a saturation level between 96 and 98% all day.

USER A: TWITTER
lol karma’s bitch and COVID knows it

USER C: TWITTER
If you are wishing for the president’s death, you are making a very serious mistake, morally and in terms of your electoral goals.

TWITTER COMMS: TWITTER
tweets that wish or hope for death, serious bodily harm or fatal disease against *anyone* are not allowed and will need to be removed. this does not automatically mean suspension.

USER F: TWITTER
If you wish death on him you uourself are a trump.

USER A: FACEBOOK
The left wants him to die, they wish for his death, they give us a sense he’s at death’s door, and what they don’t realize is this is exactly what Trump wants. When Trump comes back, he will seem that much more powerful, and it will be a landslide.

POOL REPORT
That was a decision made by White House operations because he wasn’t deemed to pose a threat but I’ll get you an answer on the specifics.

POOL REPORT
I do not have a tick tock on that. I’m happy to try to track that down. There’s certain sensitivities on how that information is shared.

USER B: FACEBOOK
Thinking of my mom who died on her own in a hospital from covid and we couldn’t even get the f*cking facetime going to say goodbye and if he dies at least he gets to say goodbye, we all have to f*cking hear that sh*t

OSTEOPATH
He spent most of the afternoon conducting business, and has been up and moving about the medical suite without difficulty.  While not yet out of the woods, the team remains cautiously optimistic. The plan for tomorrow is to continue observation in between doses of Remdesivir, closely monitoring his clinical status while fully supporting his conduct of Presidential duties.

USER A: TWITCH
I play this way with friendlies. Just trying stuff out. Just trying new combos, high risk, high reward. What we know is this is no accident, and you can talk about China or you can talk about how this is magically striking down all these Republicans even though it was Democrats out looting in big groups and—ouch, fuck—and it was this one magical event. If I just shield and punish afterward I can nail this dude, I’m trying to punish with upsmash—at this one event replacing the Inglorious RG Basterd everyone who’s important there gets it? How stupid do they think we are? These Republicans, this president, these are strong, fit guys.

USER G: TWITTER
I am a librarian and I don’t make much money, I’m someone who has been spending months changing my life and having my income severely reduced, making sacrifices, not seeing friends, and I don’t wish death on anyone but bitch it’s called karma.

OSTEOPATH
I didn’t want to give any information that might steer the course of illness in another direction, and in doing so, you know, it came off that we were trying to hide something, which wasn’t necessarily true. The fact of the matter is that he’s doing really well.

POOL REPORT
I would defer to the doctors. We do have a fully operating medical team here. I don’t want to get ahead of any announcements if they will or won’t move him, but there’s a lot that we can do here from the White House, the residence, and of the medical [inaudible].

USER H: TWITTER
Am I the only one who thinks this was a targeted attack?

USER I: TWITTER
Naive to think there wasn’t an agent at nominating event targeting Trump’s inner circle with COVID-19.

USER K: TWITTER
Classic trump: change the news cycle. Now everyone’s forgotten he’s a white supremacist, and he can change course on Covid and reap the sympathy vote, too. Don’t fall for it! .#TrumpCovidHoax #BidenHarris2020

USER A: FACEBOOK LIVE
And we have a serum that is very much the same, that I think you and your loved ones are going to be happy with, even if it’s not the same precise one in Water Reed right now with the president, you can have something very close like that at home for you and all your loved ones, whether you’re infected of you’re just making yourself ready, there’s a link in the show notes. I think what this brings home is what a sham all of this lockdown crap has been, because you have a president with all the protections in the world, and now he’s got it, and so what you think that a napkin over your mouth will keep you safe?

TRUMP: TWITTER
I really appreciate all of the fans and supporters outside of the hospital. The fact is, they really love our Country and are seeing how we are MAKING IT GREATER THAN EVER BEFORE!

USER N: TWITTER
All the libs wishing death on the president will burn in hell. Watch this get instantly deleted while all the sick anti-trump tweets stay up #MAGA #TwitterCensorship #TwitterHypocrisy #TwitterDoubleStandard

USER A: TWITCH
And now no one’s even talking about the mail-in ballots and all the Democrat fraud.  Fuck. And there’s Ganondorf with a perfect dair to up-smash combo. And the fact is that Trump is still everyone’s president, even these antifa cop killers and anarchists, but they’re wishing death because they have no humanity. When I started playing Zero Suit I was super campy, now I’m off-platform as much as possible. I used to be addicted to paralyzer but—goddammit!  I’m going for the combos and this is what happens, what happens happens, I’m just playing around, I’m getting better.  Good going, bruh. One more? Ganondorf, I’m sorry, but am I wrong or does he look exactly like RBG in hell? I need another shot. I’m getting fired up now. I’m going to stop trying out new combos and just play.

OLIVIA NUZZI: TWITTER
Three days after the public learned about President Trump’s COVID-19 infection and the viruses spread through the White House and federal government, WH staff finally received an email telling them what to do if they have symptoms. @NYMag obtained the note, sent by WH Management: 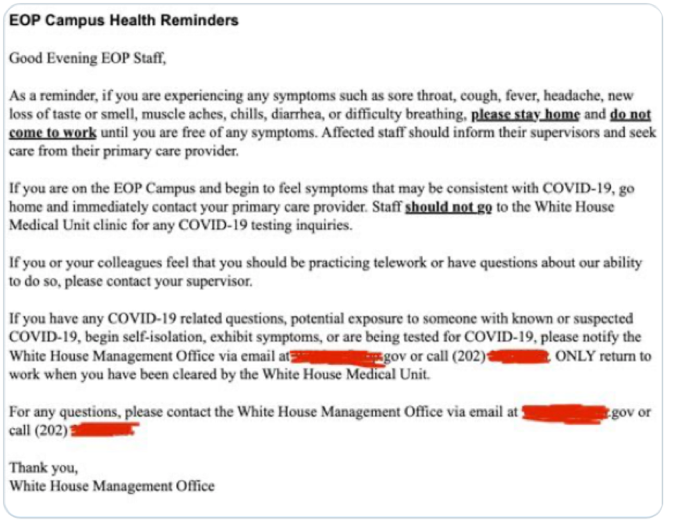 DAN KOIS: SLATE
. . . How are we meant to feel about the suffering of a monstrous man? What does it mean to anticipate his death, to fear the ramifications of it or fleetingly fantasize about it? . . . [approximately 1,200 more words]

TRUMP: TWITTER
It’s been a very interesting journey; I learned a lot about Covid. I learned it by really going to school. This is the real school, this isn’t the let’s-read-the-book school. And I get it and I understand it and it’s a very interesting thing and I’m going to be letting you know about it. In the meantime, we love the U.S.A. and we love what’s happening.

CRAIG SPENCER MD MPH: TWITTER
BREAKING: Moments after stating “I learned a lot about COVID”, the President takes a joyride in an enclosed space with presumably #COVID19 negative people, all while on experimental medications.

JAMES P. PHILLIPS, MD: TWITTER
Every single person in the vehicle during that completely unnecessary Presidential “drive-by” just now has to be quarantined for 14 days. They might get sick. They may die. For political theater. Commanded by Trump to put their lives at risk for theater. This is insanity.

USER A: FACEBOOK LIVE
But that’s the Democrat plan, masks, fear, lock it down, cripple the economy, get Biden in, get socialism in, and we can say goodbye freedom, goodbye second amendment, goodbye police and safety, goodbye America. I’m praying for the president, will you pray with me? I’m praying, and please will you join me? Just praying we get the outcome that you know that I want and that I know that you want. And how about all of us, everyone who’s out there, everyone in the sound of my voice, let’s think of what we know we want so very badly, and let’s pray for that.