Musk is simply the first such rodent to take over the laboratory.

Something is always breaking down on the New York subway, and when the loudspeaker announces it to the ladies and gentlemen, you have to invent a new route to your destination. On one occasion, I found myself walking back and forth through a subway station with a group of Chinese people, Latin Americans, and Europeans. None of us could manage to figure out a new way to get to Queens, where not a single train seemed to be going.

The Worker in the Red Cap Won’t Shake You Awake 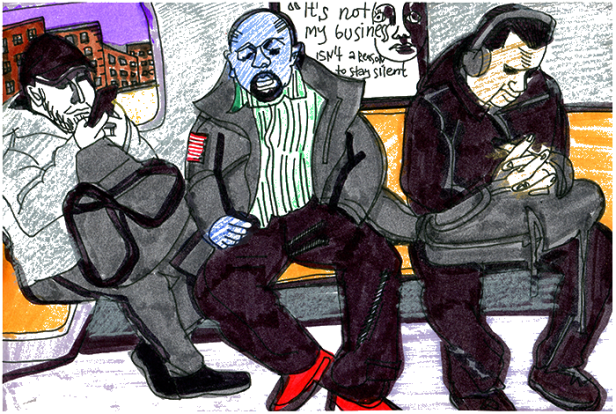 I spent my first week in New York installing my solo show and didn’t see anything other than the train I took to and from the gallery. Just like the Moscow Metro, you have to have a card, and structures bar entry without it—either huge turnstiles or spinning cylindrical cages. But there is no worker in a red cap anywhere near them. In the majority of subway stations, in order to save money, there are no service people. Instead, you will only find ticket machines, which are, often, not working right. You’re supposed to put your credit card in and out, and when, after a fifteenth attempt, I still couldn’t buy the ticket to get on the train, I suddenly felt very lonely. New Yorkers rushed past, each one of them with only themselves to rely on. “In Russia, you’re never alone. You’re always controlled. They’ll say something rude to you, scold you, but in the end, they will push you through,“ I thought, standing before the metal door that refused to turn for me. “What if control is also a form of care?”

Something is always breaking down on the New York subway, and when the loudspeaker announces it to the ladies and gentlemen, you have to invent a new route to your destination. On one occasion, I found myself walking back and forth through a subway station with a group of Chinese people, Latin Americans, and Europeans. None of us could manage to figure out a new way to get to Queens, where not a single train seemed to be going. 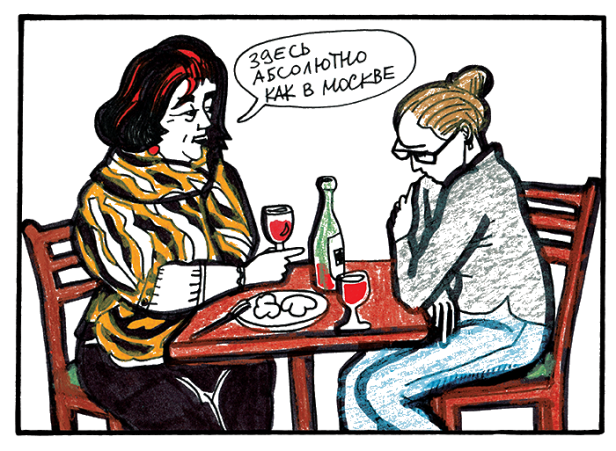 On the first day I had off in New York, I went to Brighton Beach. It was cold and windy, so there were hardly any people on the boardwalk—just a young couple, a few old ladies, and a mother and daughter. The mother spoke Russian, and the little girl answered in English. 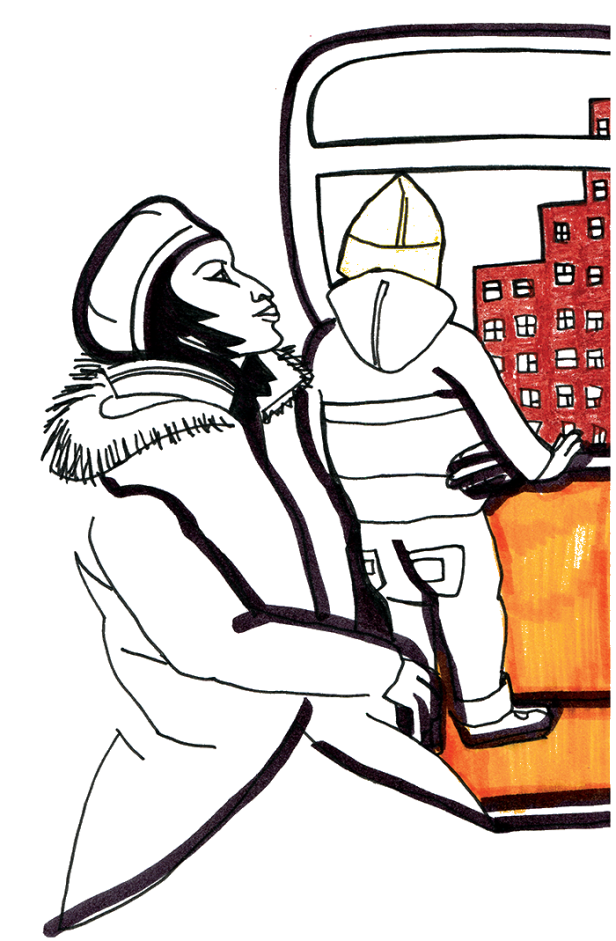 America constantly reminds me of Ray Bradbury’s Martian Chronicles. People resettled on Mars keep trying to pretend that they’re still on Earth (in Europe, in China, in Mexico, in Russia?), with mediocre results. Matroyshkas gawped at me from the shop windows, Gus-Khrustalny crystal sparkled by, until finally, I came across a sign that read “HIRING a woman with experience to MAKE pelmeni and vareniki.” I decided to grab a bite. The menu featured pelmeni, vareniki, borscht, plov, and khinkali. Russian pop stars danced across a large flatscreen TV. An elderly regular was telling the waiters—and apparently, not for the first time—that this restaurant had perfectly captured the atmosphere of a Moscow café. For me, there wasn’t a moment when I could forget that I was on the other side of the world.

After Brighton Beach, I immediately wanted to return to the center of Brooklyn. I headed to a demonstration in support of black trans women, seven of whom had been murdered in the US in the past two months. The demonstration was happening in front of the Barclays Center. And it was there, among a diverse crowd of young people, holding signs and beating drums, that I actually felt at home. It reminded me of the best moments of the 2012 protests. It felt like I was back at Occupy Abai. 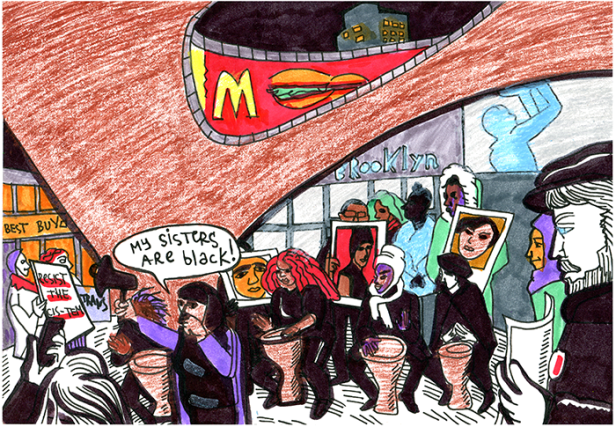 One evening, when I stepped into the supermarket I usually went to, I noticed a crowd of people all buying groceries in large quantities. I had to wait in line for half an hour to get to a cashier. It turned out that there was supposed to be a big snowstorm the following day.

The next morning, when I looked out the window, I saw what for me is the usual winter landscape. In Russia, these kinds of “snowstorms” can go on for weeks. The city was empty.

Wrapping up, I ran out of the house and immediately found myself knee-deep in snow. It had completely blocked the entrance to the subway, where instead of stairs, I found a sparkling white mound of snow, untouched by footprints. At another entrance, someone had trudged a path down. I grabbed onto the railing and descended, heading back to the Barclays Center. 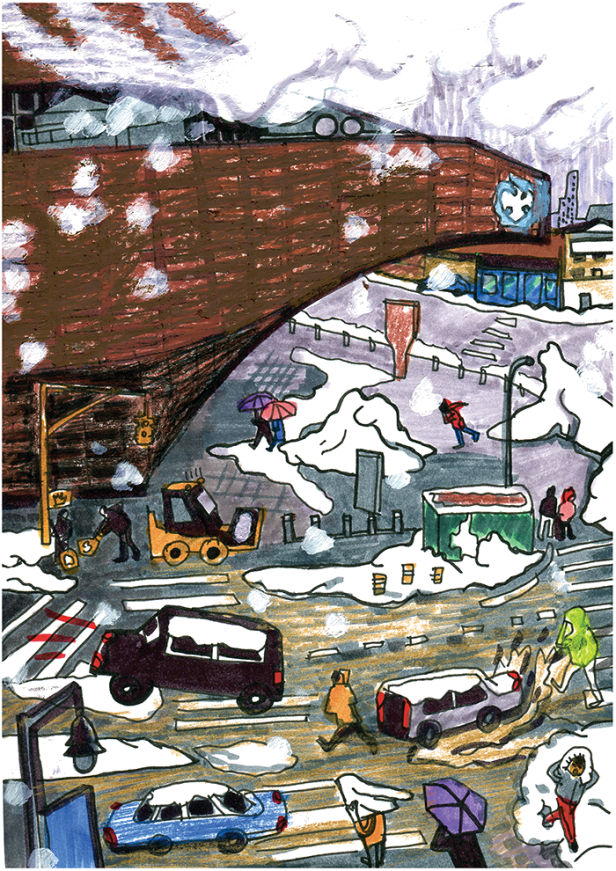 There are usually a lot of people outside the Hoyt–Schermerhorn stop, but that day, only a handful of passers-by walked on the road. Now and then, there’d be people trying to dig through the snow with big shovels. “It’s too bad I didn’t bring my heavy coat so I could draw outside,” I thought. And immediately, my eye caught an artist standing on the street drawing the snow-covered city. I approached him. He smelled like good weed. He said his name was Dale, he was a professional illustrator who worked in an office, but since public transportation wasn’t running that day, he, like many other New Yorkers, was getting the day off. I couldn’t believe my eyes: as Dale observed the snowy cityscape and the figures lost in white, he was making abstract drawings! 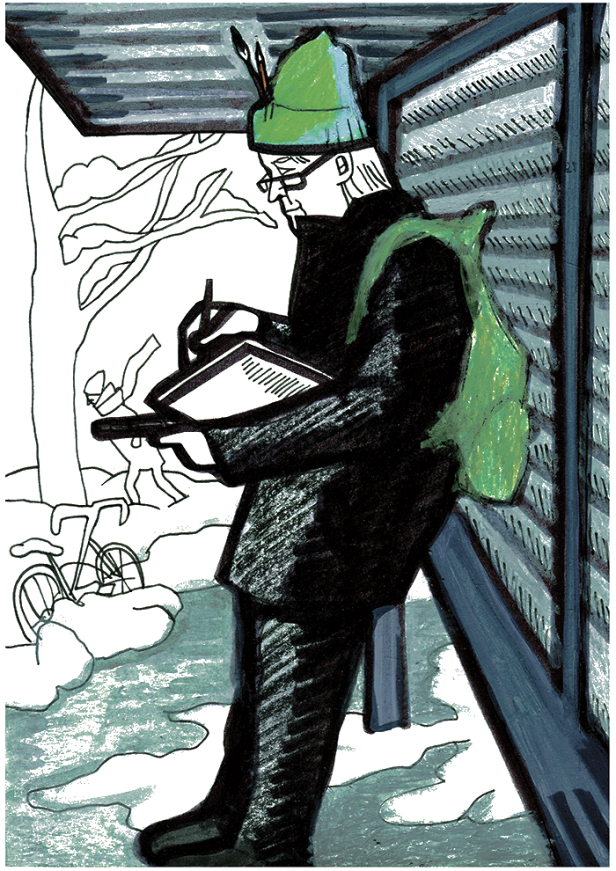 You really won’t find any socialist realism in America.

Part of my book tour took place on the West Coast, in Portland and Seattle. Weed is legal in Oregon and Washington, where you can buy joints, weed chocolate, candy, and just plain marijuana in special stores.

In Seattle, a professor from the University of Washington, where I gave a talk, showed me around the trendy gay neighborhood, Capitol Hill. It’s full of gay and lesbian bars, and the sidewalks are painted with crooked rainbows. 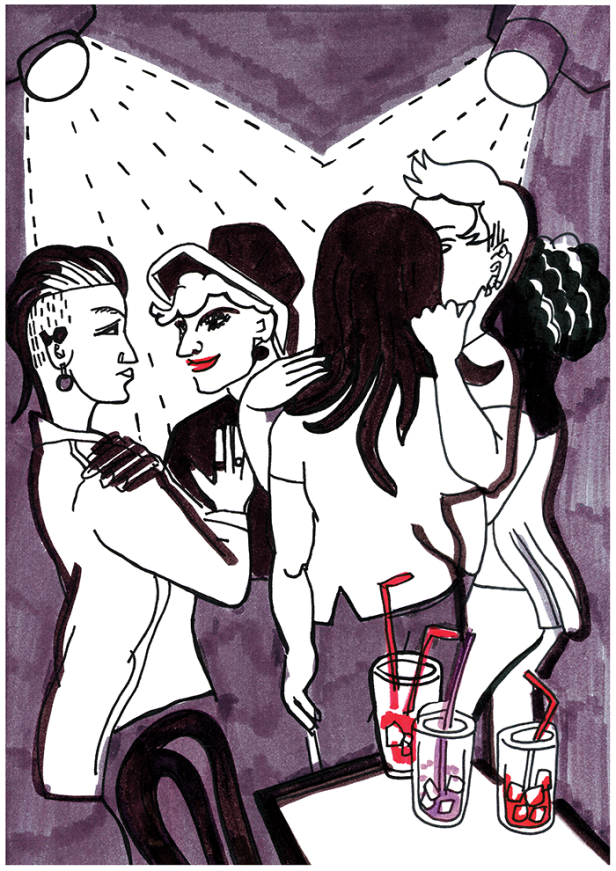 The professor took me out to a club called Julia’s for a drag show. The tickets cost $30 to $50. In the underground clubs I went to in Moscow and St. Petersburg, performers in silly dresses and awkward makeup probably made very little money, while being gay could mean social if not physical death for them. Here, on a well-lit stage, they wore expensive dresses and imitated American pop divas. The room was full of hetero couples. The audience roared, clapping and stomping their feet. After every number, the performers would go out into the audience to collect tips. At the end of the show, it turned out that it was one of their birthdays, and they brought out a cake, decorated with a penis, and stuffed it in her mouth. “This is democracy,” the professor told me. “Everyone is free to sell their body.” 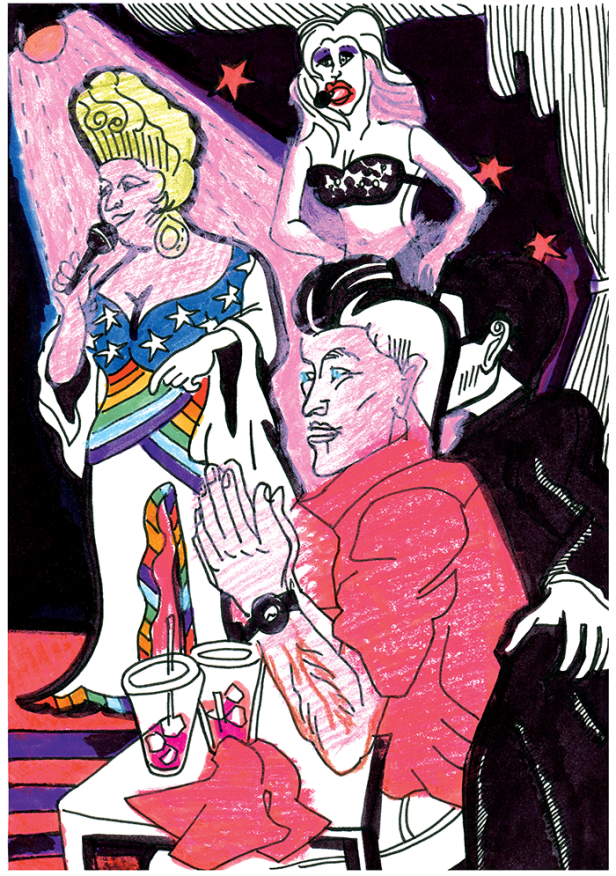 In Fremont, a former hippie and currently hipster neighborhood in Seattle, there is a big Lenin monument. In 1989, it was brought over from Slovakia by an American, Lewis E. Carpenter. Vandals or activists had painted Lenin’s face and hands red-orange, making him look like either an executioner or a clown. Lenin’s new owners are still unsuccessfully trying to sell him. 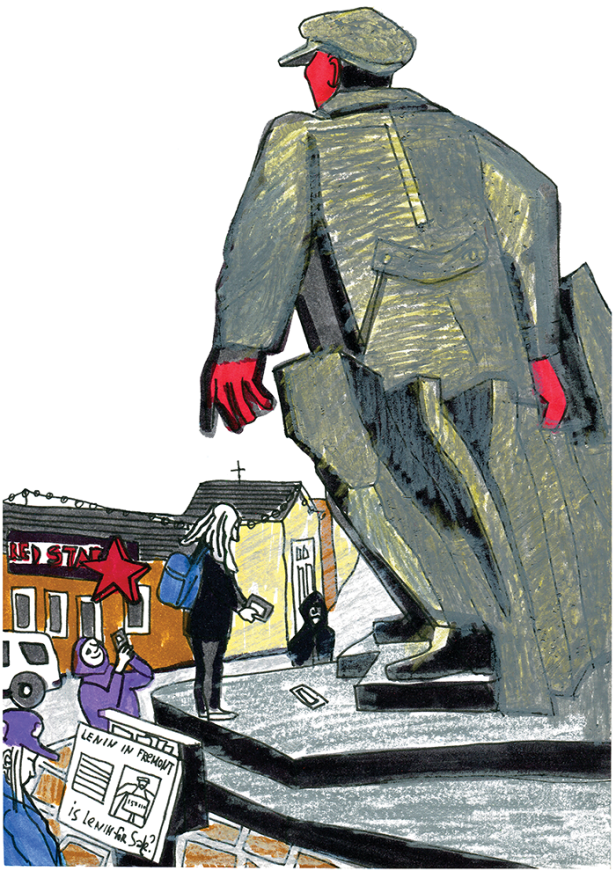 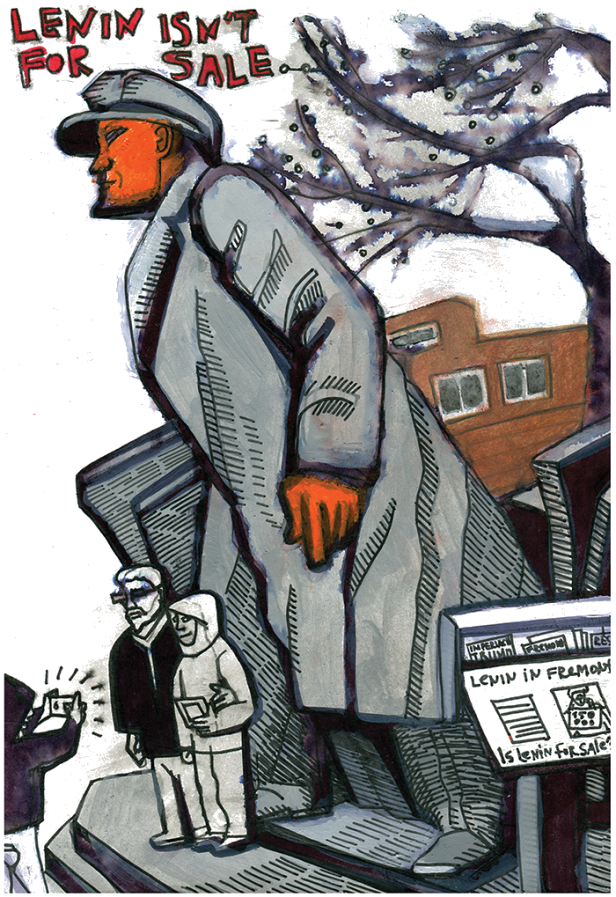 Pittsburgh was the final stop on my tour. Pennsylvania, classic America. City of Asylum, a non-profit organization, let me stay in a two-story home for political writers, recently occupied by Svetlana Alexievich. In other houses owned by this organization, there were refugee writers from Syria and Bangladesh.

My house stood on the border between a rough neighborhood and a fancy one. As the suburbs grew, the steel plants began shutting down around Pittsburgh, and unemployment started to soar. Pittsburgh’s population fell by nearly half. African Americans moved into many of the cheap or abandoned houses left behind. I tried to draw the border between downtown and the new center, which was built as Pittsburgh began to revive. 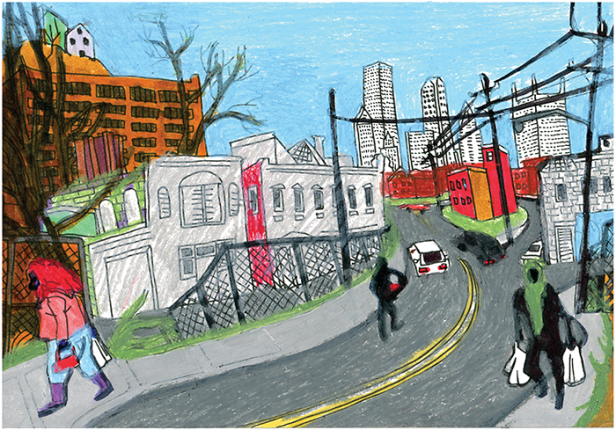 Where I stood drawing, grass grew through cracks in the sidewalk, the fences bowed toward the earth, and old houses were falling apart to either side of me, filled with birds singing, just like in the country. Black men and women walked past from the supermarket, carrying heavy bags. In the two hours I stood there, I only saw one white couple, who were jogging through this neighborhood. Some acquaintances pointed out fenced off-former railroad tracks, now a bus line that takes the people from the economically disadvantaged area to their jobs in other parts of the city.

The Cathedral of Learning towers over the new center of Pittsburgh. I nicknamed this building the Tower of Death. After touring a number of American universities with talks, I learned that in America, people pay off their student debts for decades, degrees in the humanities are practically worthless, and it’s very hard to find a job if you have one. If you’re lucky, you might get hired at a university for five to seven years, after which you have to go through a tenure review. If you pass, you get tenure; if you fail, you’re fired. The majority of professors I met considered being fired like this a form of death and two of them had just lost their jobs in this way. 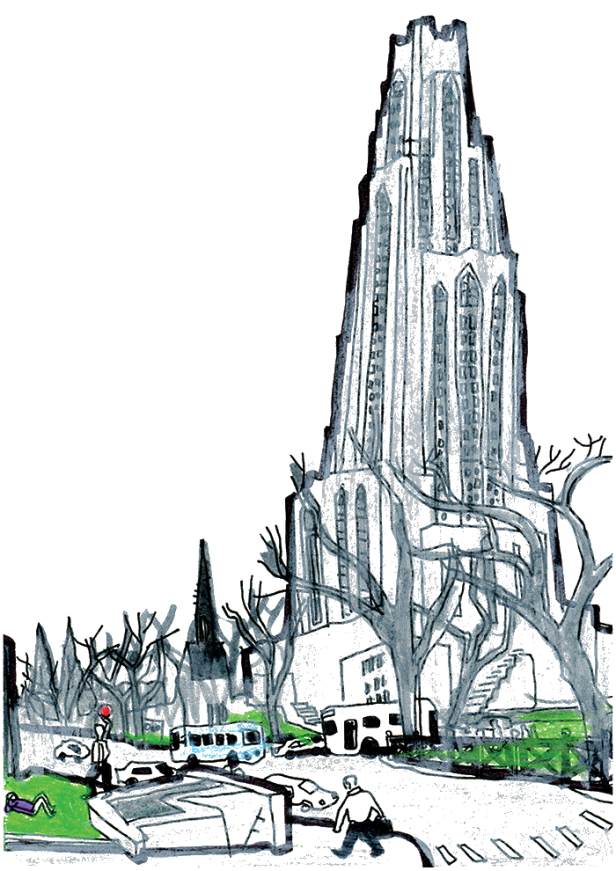 It turned out that what we’d learned in Soviet school about the “ulcers of capitalist society” wasn’t pure exaggeration and propaganda. Despite this, America retains its halo in my eyes. It’s better to live independently in a cutthroat, competitive environment with a sea of opportunity than be completely controlled by the government without any prospects for moving up. 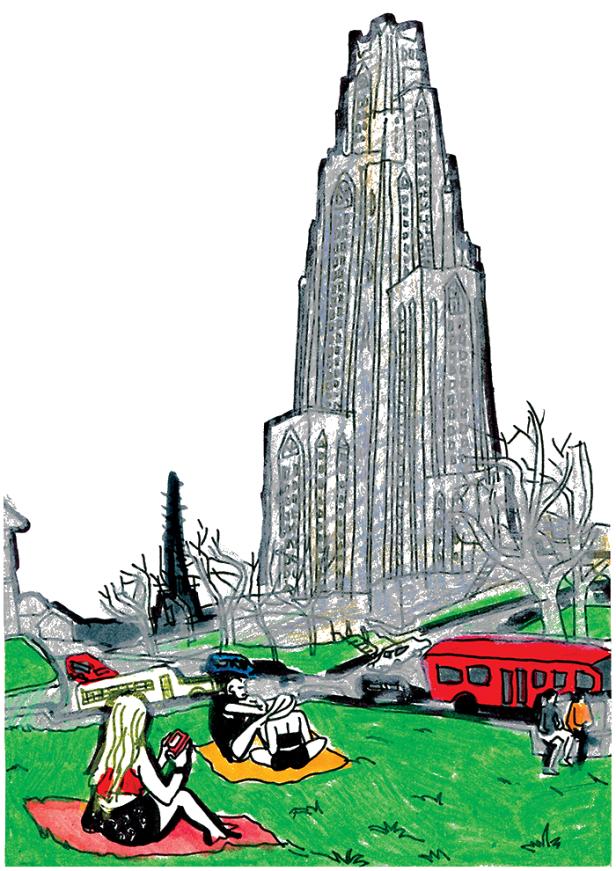 Like Oedipus, we flout the warning, and we’ll act surprised, even outraged, when we find out what we’ve done.

Why can’t we imagine terrorists surrendering?

An excerpt from Other Russias