A discussion of The Feeling Sonnets

Interviews aren’t the same as sworn testimony, but they rhyme.

Drawing Lessons at a Juvenile Prison

An excerpt from Other Russias

The following is an excerpt from Victoria Lomasko’s new book, Other Russias, just out from n+1. Translated by Thomas Campbell, Other Russias collects nine years’ worth of Lomasko’s illustrated reportage. It is available directly from n+1.

In August 2010, I visited the Mozhaysk Juvenile Prison for the first time, as a volunteer for the Center for Prison Reform, and gave a drawing lesson to some of the inmates. I taught drawing classes at the girls’ penitentiaries in Novy Oskol and Ryazan and the boys’ penitentiary in Aleksin, but Mozhaysk is the only place I visited more or less regularly. I was originally trained as an educator, and before I came to Mozhaysk I prepared an experimental syllabus with ten lesson plans.

There was almost no funding for the trips. We traveled by commuter train, carrying everything we needed for classes in our backpacks, so, with rare exceptions, we used the simplest materials during the lessons: paper and black pens. The Center organized the trips once a month. If you missed a trip, you had to wait for the next time around.

There is a constant turnover of inmates at the juvenile prison. Some are released on parole, others are transferred to adult prisons, and new inmates show up all the time. Over a six-month period, the roster of my drawing groups changed completely.

Some of the teens were well educated, while others were hearing everything for the first time. Many of them had psychological problems. In short, teaching classes at a penitentiary was tricky: you had to experiment and develop your own lesson plans.

Why did we travel to the prisons? The Center’s staff and volunteers bring clothing to inmates about to be released on parole, as well as hygiene products, birthday presents, and treats for the other inmates. Staff and volunteers also provide psychological assistance and gather information for publications aimed at troubled teens. The Center also recruits creative people willing to work regularly with the teens, who need interaction with people from the outside world no less than they need shampoo and socks.

I realize I cannot teach someone to draw when the lessons are so infrequent. My emphasis is on developing analytical thinking (structuring the drawing) and empathy (working on the image). It is also vital to help the kids gain self-confidence, so all of their work is shown at exhibitions. We photographed the exhibitions and brought the photos back to the prison to show the kids.

The kids found out about the drawing lessons from their minders, but more often they heard about them by word of mouth. Between five and ten students came to my classes. There is often a self-taught artist among them, someone who really wanted to learn to draw.

I continued the drawing lessons until 2014. I hoped that we could receive some kind of grant for the project, so that the trips would be more frequent, and so that we could publish a book with all the work we’d collected and developed over four years: the lesson plans, the student drawings, and the photographs of the exhibits. Unfortunately, funding became even harder to acquire, and access to the prison only became more constrained, so we were unable to publish the book. All the archival materials from the project are currently housed at the Museo Nacional Centro de Arte Reina Sofía in Madrid; I didn’t want them to remain in Russia, where they could very well have disappeared, like so many materials from past social experiments. 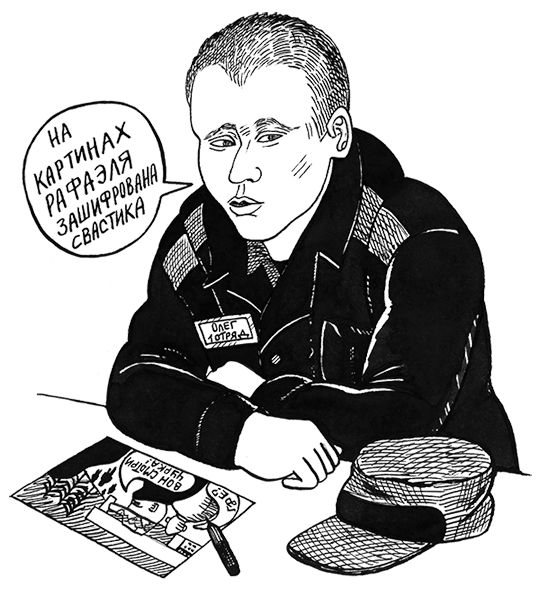 “There are swastikas encoded in Raphael’s drawings.”

Oleg draws a lot. He has his own views of Renaissance masterpieces. 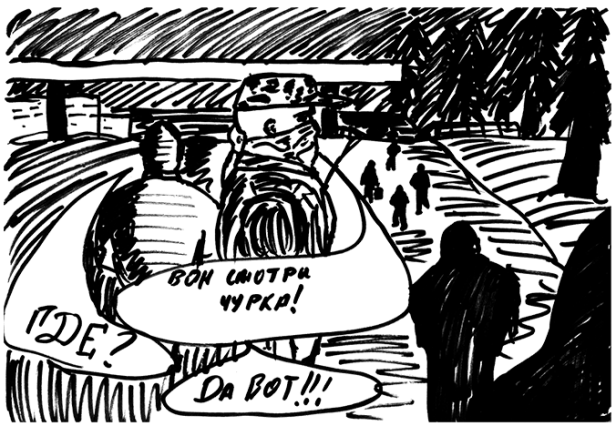 Oleg is a skinhead. It all started when, at the age of 8, he witnessed the murder of a friend. Teenagers from the Caucasus killed him over his telephone. At 14, Oleg organized a “fight club,” in which he was the youngest member. The fighters “staged flash mobs at Caucasian markets.” In his small provincial town, Oleg said, the population was divided into skinheads, people from the Caucasus, and suckers. He was convicted of a gang killing. He expected to be rewarded for his patriotism, not punished. Oleg had kept up his spirits at the penitentiary by studying foreign languages, philosophy, and economics. He dreams of becoming a politician: “Yanukovych’s priors didn’t stop him from becoming president.” In the fall, he was transferred to an adult prison. 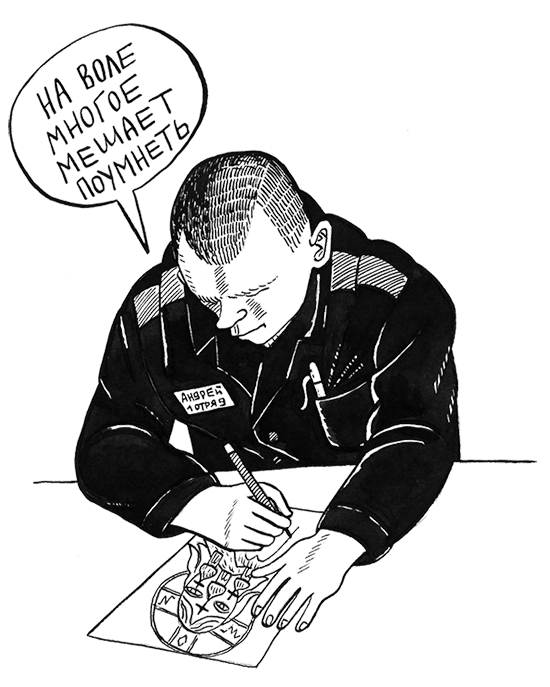 “On the outside, lots of things keep a guy from wising up .”

Andrei is a prison artist. He makes “bands” — pen-and-ink drawings on handkerchiefs and other pieces of cloth — a popular art form in Russian prisons. He wants to draw beautifully and with feeling, yet he despises formal exercises. But he did like the lecture on concentration camp drawings. He read Solzhenitsyn and taught himself to draw by copying illustrations in books from the local library. Andrei’s sentence ended before the New Year, but no one was waiting for him on the outside when he was released. 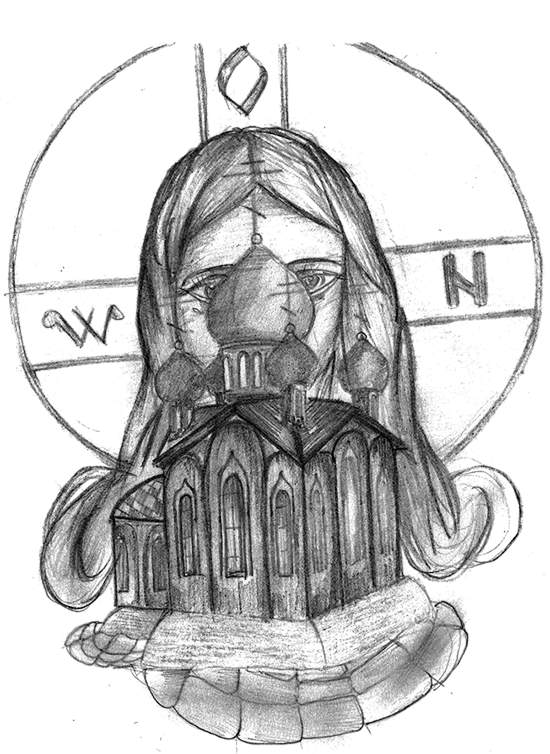 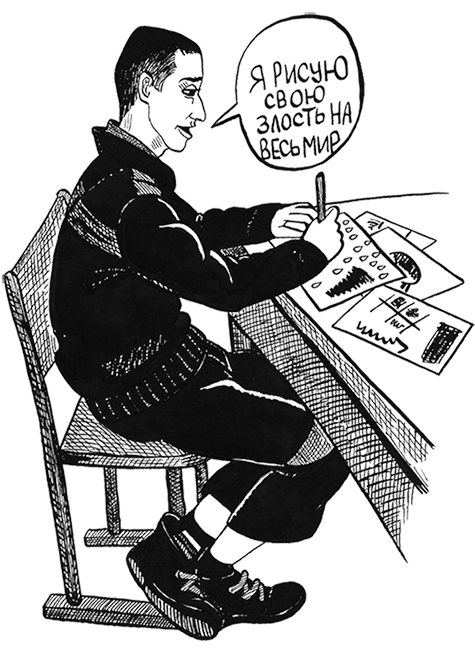 “I’m drawing my anger at the world. Each drop is a grievance: it’s like rain.”

Yevgeny is a gambler. He was sent to the colony for busting open a slot machine. He didn’t know how to draw and didn’t want to learn: he came to class to get things off his chest. Yevgeny always looked tense. He hated his surroundings and once said he wanted to murder people. Oleg, the skinhead, took him down a peg. “Shut up. You don’t know what murder is.” 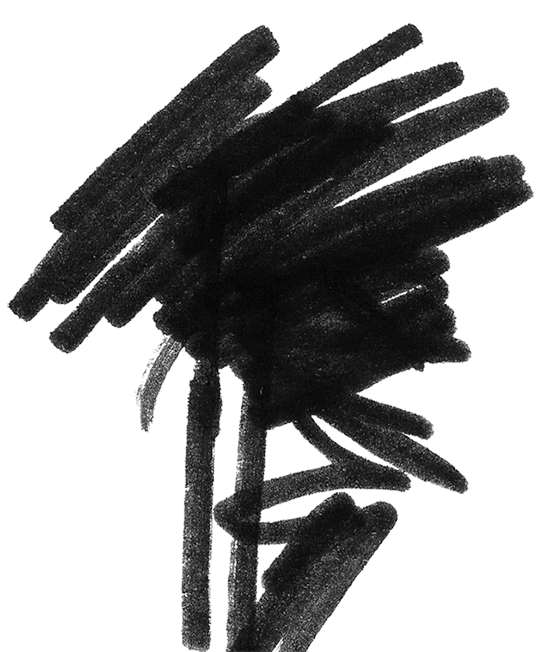 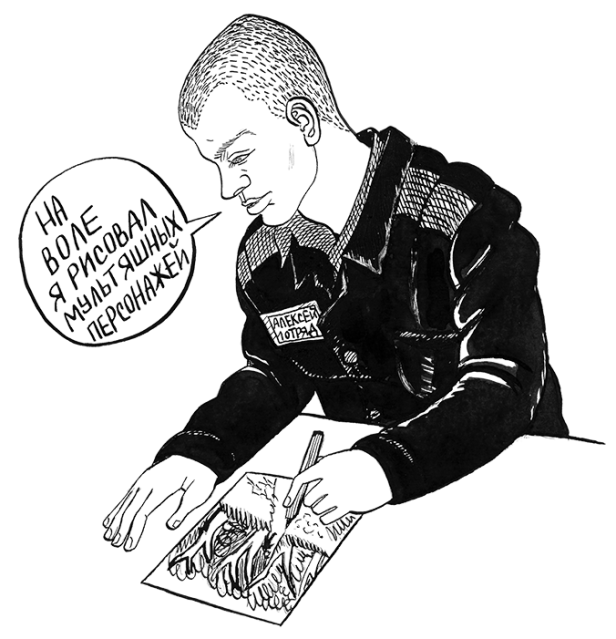 “On the outside, I drew cartoon characters.”

Alexei is a tall and handsome teenager. He is well read and has a good memory. What he liked most during the lessons were the explanations of the abstract foundations of composition, which either irritated or dumbfounded the other inmates. 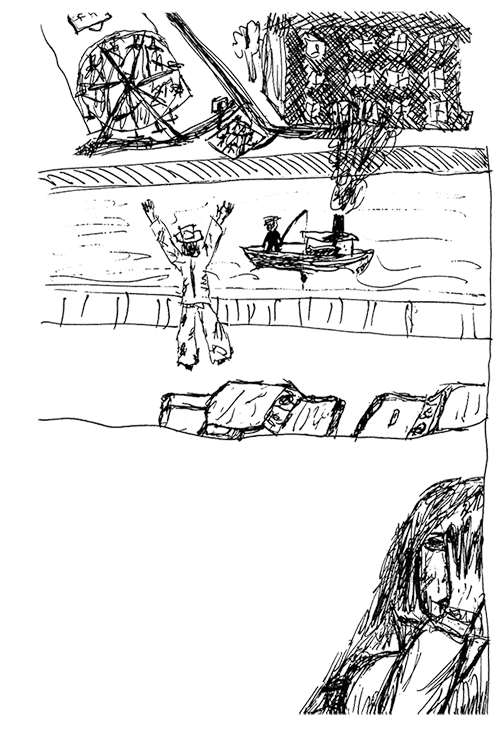 It was obvious the other boys avoided Alexei, and one of them half-jokingly called him a maniac. It turned out that once, on New Year’s Eve, Alexei had committed a double murder while intoxicated. One of his victims had suffered approximately fifty stab wounds. Before the New Year, Alexei was transferred to an adult prison in Tambov, while the skinheads were sent to a prison in the Moscow region.

Human rights activist Natalia Dzyadko has worked with the penitentiary for eight years. Along with staff members at the Center for Prison Reform, she brings the inmates candy and presents on their birthdays, and she invites people willing to work with the boys to come to the prison. It is difficult to gain entry to the prison without outside help. There are exceptions, however. The famous actor and musician Pyotr Mamonov has been granted the right to visit any time, without a pass. He doesn’t come that often, once or twice a year, but the inmates who have caught his concerts at the penitentiary still remember him. 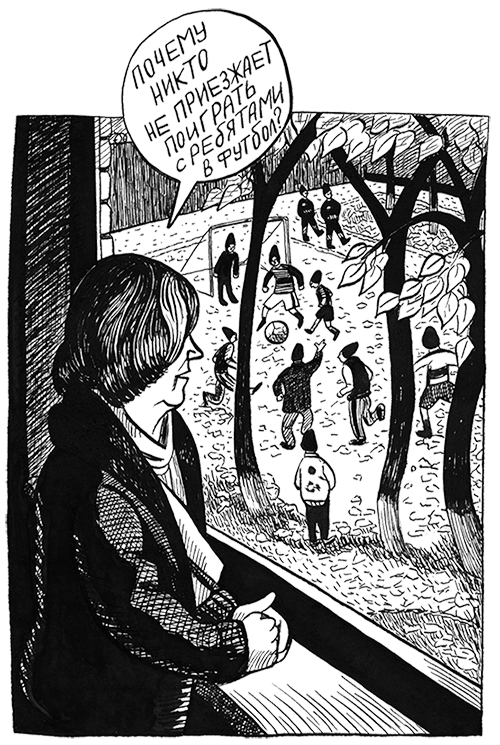 “Why doesn’t anyone come here and play soccer with the boys?”

The inmates have almost no time for themselves: their lives are organized around a strict schedule. But when they do have free time, what they like most of all is playing soccer. 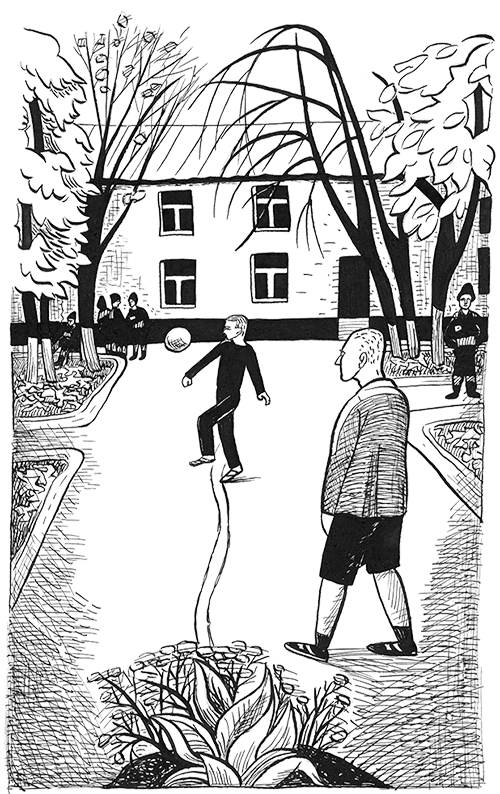 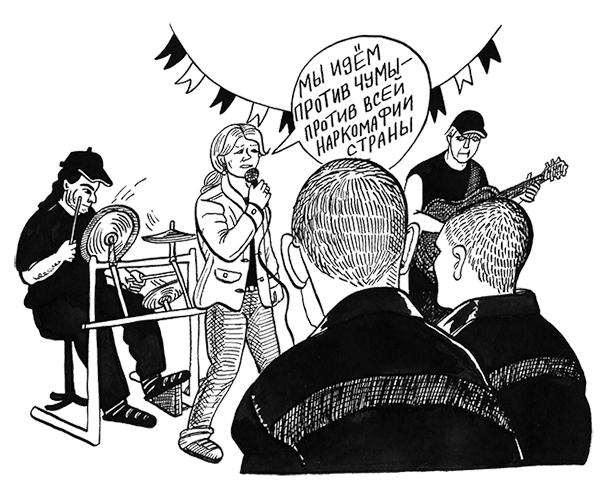 Activists sometimes visit the penitentiary, including a band consisting of former alcoholics and drug addicts from the organization Transfiguring Russia. The musicians performed songs they had written about the benefits of a healthy lifestyle. 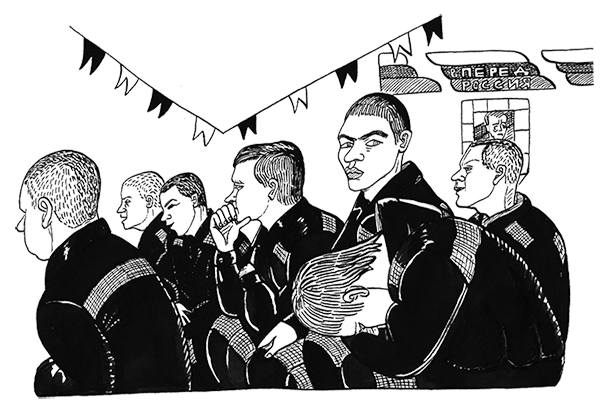 The boys said the concert was cool, but it was odd that the musicians were wearing slippers and torn socks. 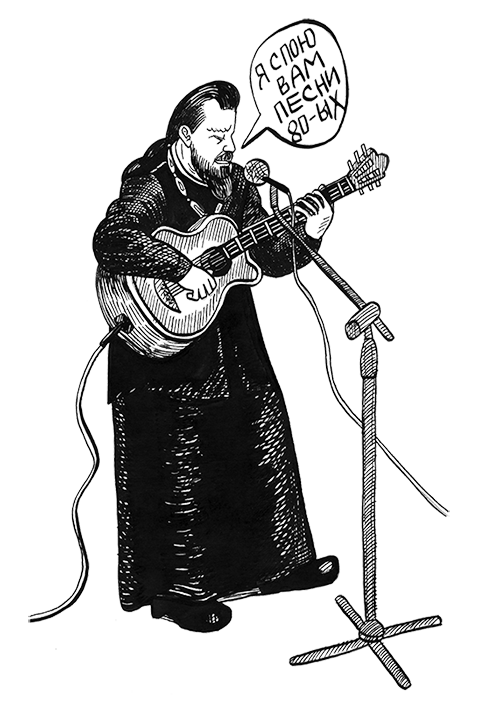 Father Andrei, from The Descent of the Holy Spirit Church, also visited the inmates. The church is famous for its prior, the former rock musician Sergei Rybko. The priest performed several songs at a concert in the prison. 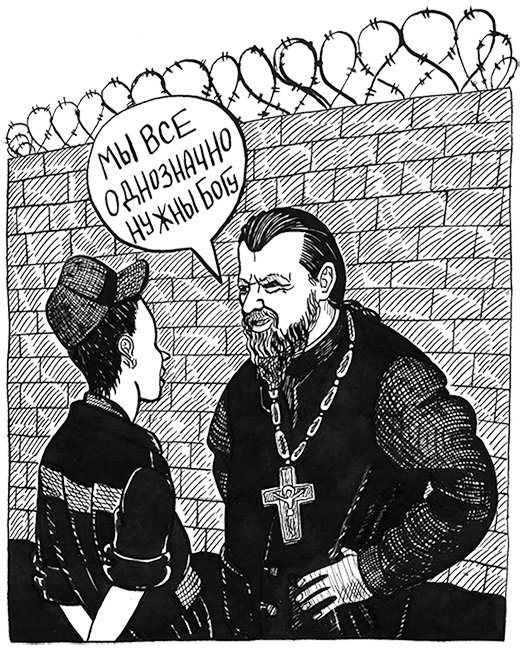 “God definitely needs all of us.”

As in adult prisons, many inmates at the juvenile penitentiary turn to religion. There is a tiny wooden church on the premises. There are lots of icons in every residential unit, and even the TV in the common room is ringed with icons. Orthodox priests frequently come on the weekends to receive confession, chat, and show films about Russian Orthodoxy. No one comes to see the Muslim boys. 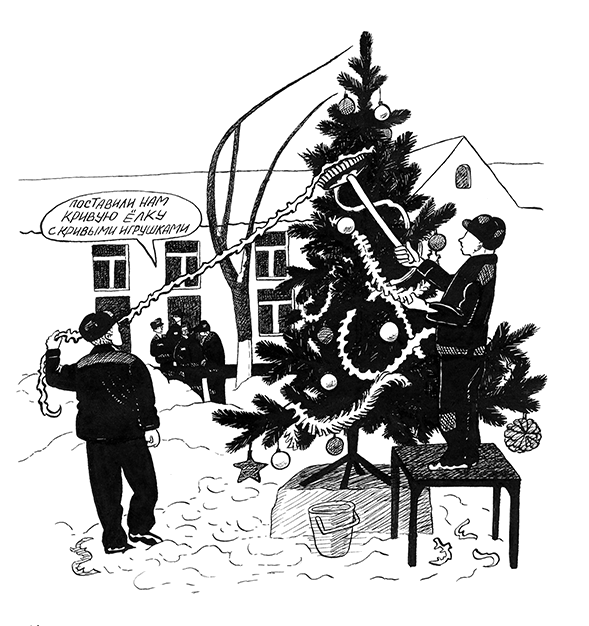 “They’ve put up a crooked New Year’s tree for us, trimmed with crooked decorations.”

As the New Year approached, there were few boys left at the penitentiary. Some had been released, while others had been transferred to adult prisons.

Other Russias is on sale now in the n+1 Bookstore.


More by this Author