Human, Not Too Human

A Bunch of Nobodies

Why Literature Matters When It's Somewhere Else

Art Chronicle; or, The Icon Emigrating

Age of Chivalry Not Over, French Doctor Says.

File It Under Secular Neglect

A Bunch of Nobodies

Two sets of images bookend our Iraq War. First, there were the photographs of the naked protests of men and women, in what seemed to be the most ineffectual or deliberately trivial dissent, at a time when not even articulate dissent on a mass scale could stop the war. Now, we see photographs of the naked, piled bodies of men, sandbags on their heads, and Americans laughing at them.

The naked protests that began in West Marin, California, at a place called Love Field, on November 22, 2002, may have been whimsical, but they were the most moving and lastingly remembered gestures of protest in the run-up to the war. The point was just to show flesh: the healthy bodies that everyone forgot about in the discussions of WMDs and US power. Extraordinary that people can discuss war without saying to themselves, over and over: “we will kill people, we will maim, we will destroy flesh, we will burn and harm. That is what we are planning to do.”

The naked protests, which spread across the globe, were a reminder of what went unsaid. Because the pictures were shot from above, they recalled the bombs that would drop. A peace sign looked like a target. Or the human peace signs drew imagined targets on the landscape in order to turn them back into peace signs. 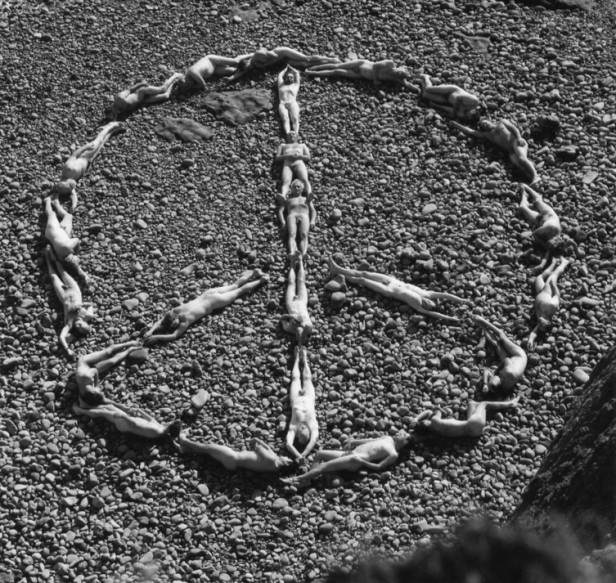 The purpose of these messages, made by neighbors, strangers, local inhabitants in a landscape, was just to say that if all the human beings beneath the gun sights could express their true emotions, they would call for peace. If only the bombardiers could see the people they were killing, without their uniforms or national dress, they would see that they were killing common soft flesh. If only the thousands of imperiled bodies could be identified in their mere human body-ness, with little traces of individuality—the woman with the red hair, the man who was so tall . . . How could the pilots pull their levers then? You see how hard it is to put into words what these pictures make you feel. The words are hokey, the sentiments old. But it’s true: no one wants to be burned alive by those bombs.

This was an action of people consciously manifesting themselves, not as individuals, but as human beings. It was possible for them to make the body into a sign because it delivered a common message belonging to all vulnerable people as such. (That was the beginning of our war, for some of us. Then the college kids went on spring break, they bared their breasts and pulled down their shorts, they photographed one another passed out in hotel rooms, and they knew that they were living the best part of their lives in the best nation on earth.)

Sex is one of the first things we’ll export to the Middle East. US sexual iconography has already made a dent in other cultures, from India to Jordan. The Abu Ghraib photographs are a logical extension of what we already do, and a measure of how dumb we’ve gotten. Our TV networks rushed to tell us facts they thought we wouldn’t figure out, like an anthropology lecture: Muslims don’t like to be pictured naked with each other. It might be humiliating to be thrown together with a strange woman, or with other men, or made to simulate sex for the camera. Have we come so far, that we need to be told? You had the nauseated recognition, when the images flashed onscreen, that our beautiful freedoms were being used for torture. 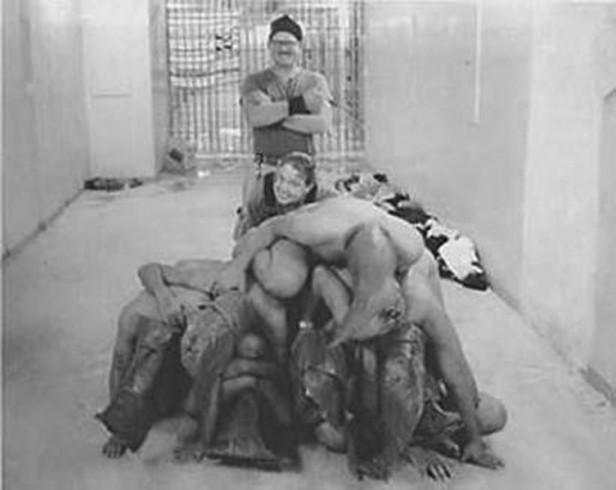 Abu Ghraib turned something we Americans do for pleasure into a weapon. The cruelty was all wrapped up in the flag. To be free in America, dangerous and still safe, an outlaw and yet banal, all you need is a tattoo, a visit to Mardi Gras, or a digital camera and willing acquaintances. Americans happen to like sexual self-portraiture, in frat houses and bedrooms and, above all, basements. We lie down on shag carpets, against tacky wood-grain walls, or in dungeons which are just bicycle chains looped around a weight bench, and wonder how our mugging will look for the camera. It is the underground daguerreotypy of the nation. But we weren’t supposed to take it abroad.

What is freedom for? Either it’s the freedom to live free of the burdens of conformity, constraint, and expectation, or it’s a freedom to bring other people under your power. Because of the way we live, the basement of the American mind fills up with the sexual use of other people. Even on the subway and in the street, porn-i-color daydreams issue through our mental viewfinders. We are sexual directors, actors, and audience, but no longer partners or participants.

There is a kind of fake refinement that turns into a vulgarity . . . it comes from deciding what other people can’t say.

Right now we plant democracy like an orchid and depart—leaving behind oilmen to drain nutrients out of the soil.

The problem is hardly a lack of magazines, even literary magazines.

In George W. Bush, we have a president for whom reading a teleprompter seems to be a physical exertion.

Intellect did not interest them, but kids did. Childhood is still their leitmotif.

Reading the Weekly Standard is like stepping into a parallel universe. Not an alien one; one nicely mirrored.

This bulking-up process has transformed the game. In fact, it threatens to render the game obsolete.

They are better than you because they act, and they will not let you forget it.

Wallace’s opus now looks like the central American novel of the past thirty years, a dense star for lesser work to orbit.

His characters are outsiders who create their own communities.

Those jokes, wherein you tweak the Man by suggesting gay sex or quoting Lacan: those are no longer funny.

I have often asked myself whether eight years of George W. Bush has been God’s judgment on America for our sins.

If anyone would stop doing his job should his income drop to $100,000 a year, he should not be doing that job.

Punk promised physical violence, a buzzing charge, like the wish that someone would hit you in the face.

In George W. Bush, we have a president for whom reading a teleprompter seems to be a physical exertion.